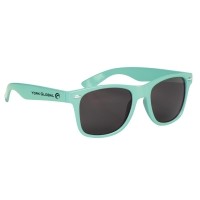 What it was purchased for: The end user wanted to give something away at this year’s Spring Break in Jamaica for an MTV event that would capture the attention of not only the Spring Breakers but get airtime on MTV as well. They chose the Malibu Sunglasses. Not only are they stylish, but they are UV protected and are a necessary item to use at the beach.

How it was distributed: As Spring Breakers made their way to one of MTV’s beach stages, they were asked to try a very small glass of this mixed drink. Once they tried the drink they were given the sunglasses.

Result or ROI: The sunglasses were a huge hit with the recipients, creating awareness for the liquor brand. They were in such high demand that they ran out of 3,000 units in less than 30 minutes and were spotted around town the entire week. Everyone in the MTV crowd was wearing the glasses, giving the liquor brand publicity all over the world.